Renton Homes and Condos for Sale

Situated just 11 miles southeast of Downtown Seattle, the wonderful city of Renton, Washington, is a great place to call home in King County. Renton sits at the mouth of the Cedar River, straddling the southeast shore of Lake Washington. The area has a rich history having long been inhabited by Nation Americans. In the 1860’s Renton was first settled by Europeans and has grown steadily throughout the years, now home to approximately 91,000 residents. Renton is the 4th largest city in population in King County and the 8th largest in Washington.

Composed of 23.54 square miles, Renton is among a handful of cities with an independent street grid system but within the Puget Sound Region. Renton is bordered by Newcastle on the north, Lake Washington and West Hill on the northwest, Kent on the south, the Urban Growth Boundary of King County on the east and Tukwila to the west.

Renton is divided into several smaller areas, generally referred to as: Downtown, North Renton, Northeast Renton, Southeast Renton and Southwest Renton. Homes for sale in Renton, Washington, vary in price depending upon in which area the property sits, as well as the home’s age, size and architectural style. Homes for sale in Renton include manufactured homes, the least expensive real estate option, condos, townhomes and single family homes. While there are sometimes exceptions, typically homes in Renton range in price from $52,000 to $3 million.

If you would like more information regarding homes for sale in Renton, Washington, please do not hesitate to contact us today.

Gorgeous, spacious & stylish 3 level townhouse with 3 beds & 2.5 baths in the gated community of Hillcrest Village. Lower floor has an open lay-out with a private patio, ...

Welcome to Morgan Court. A small gated enclave of 43 homes with easy access to shops, restaurants and amenities. This two story gem is one of the largest floorplans with ...

Nice rambler on a huge and flat .93 acre lot with public utilities hooked up. Lot is zoned R8 with possibility to split into multiple lots. Great opportunity to build mul...

Charming Rambler in the perfect Renton Highlands location! This 3 bed, 2 bath abode has a great floorplan with over 1,330 sq. ft and a generously sized lot! Kitchen is u...

Nice rambler on a huge and flat .93 acre lot with public utilities hooked up. Lot is zoned R8 with possibility to split into multiple lots. Great opportunity to build mul...

Welcome home! This sweet tri-level home has everything you need. Take a slow drive down this cozy Renton cul-de-sac to the cottage like dwelling with an open style kitche...

Serenity and peace await from this beautiful mid-century home tucked away in the trees. Nestled atop a terraced lot, along a private drive, this property sits away from t...

The database information herein is provided from and copyrighted by the Northwest Multiple Listing Service (NWMLS). NWMLS data may not be reproduced or redistributed and is only for people viewing this site. All information provided is deemed reliable but is not guaranteed and should be independently verified. All properties are subject to prior sale or withdrawal. All rights are reserved by copyright.
Like or Share
Loading likes...

Looking for the perfect home in the perfect place? Chances are you'll want to check here first. 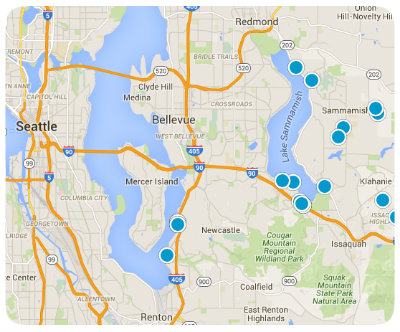